"Introducing Thunderbirds" is the first episode of Thunderbirds 1965, successfully funded through Kickstarter on August 9th 2015. It is a visualization of the audio story of the same name.

Lady Penelope and Parker head to the elusive Tracy Island in order to discover more about International Rescue. There, they witness the Thunderbird craft in action for the very first time. 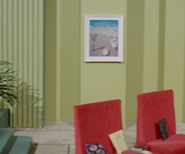 While Introducing Thunderbirds remains faithful to its source material, several exchanges were cut from the original audio, including: