The Hudson Building was a government building located in Spoke City and appears in the episode 30 Minutes After Noon.

The lift indicator, showing floors 1 to 19, and 10 floors below ground.

Explosion At The Hudson Building

Tom Prescott, a worker at the Hudson building, picks up a hitch-hiker as he drives home after working late. As he drops the man off, a strange bracelet made of hydrochromatized steel is locked to his wrist and he is told that the key is in a filing cabinet in his office at the Hudson Building. Prescott races back to the building to unlock the bracelet before the explosives device set into it detonates. He arrives at the building just in time, but is still descending from his office in the elevator when the device explodes. The elevator plunges into the basement and Prescott is trapped at the bottom of the lift shaft.

With the sprinkler system sabotaged, the fire rages out of control, the Spoke City Fire Department is unable to contain the blast, destroying most of the Hudson Building and the criminal records on the Gang he worked for.

Fire rages out of control.

The Police arrive at the Hundson building

A number of spectators are visible inside the building on the other side of the street. Nearly all are simply miniatures, but two marionettes can also be spotted. 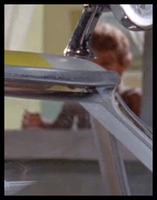 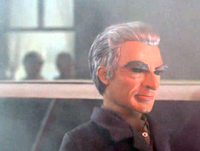 1st spectator (r.) and 2nd spectator
(In the background.)

Other appearances (Isn't That...?)