Hoverjets, also known as hoverbikes (sometimes spelled as two words), are a type of personal hovercraft used by International Rescue to traverse bad terrain and/or when the situation requires efficiency.[1]

Attached to a driver's seat, by a beam which the driver puts their legs either side of, is a control console which holds satellite-linked communications equipment and ergonomically-simplified controls for steering. Protruding upwards from this is a single-handed power-assisted steering column, at the end of which is a red switch for firing missiles. A single hoverjet can hold at least five missiles - kept at the vehicle's very front, and fired from a launch tube located there. Two underside air intakes are also located here. Above the missiles is a forward headlamp, and behind is a forward-thrust turbofan; when used in conjunction with the artificial gravity generator, this gives the hoverjet lift. The localised artificial gravity generator is used for hoverjet stability and a primary forward-thrust turbine which has a compressor.

Each hoverjet can accommodate one driver and one passenger; with both seats padded and including seat-belts for safety. Directly below the driver's seat are some cooling and forward-thrust vents. Underneath the passenger's seat are some cooling vent pipes and a variable angle support stanchion for the rear turbofan that incorporates a multi-directional steering nozzle. Here is also a left-hand turbofan and a rechargeable fuel cell which is also under the same seat. Right at the back end of the vehicle is both a left and right-hand stabilising fin.[2]

Hover Bikes in Use

Unable to use the Mole - and acting on a useful tip from their grandmother - Alan and Virgil use their hoverjets to travel through the long-unused tunnels of The London Underground, to successfully reach the Bank of England, where an employee's become trapped in the vault... 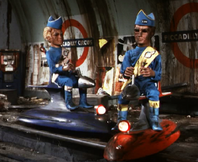 Alan faces mortal peril when he's forcibly thrown from his hoverjet, after crashing into a tree - with a giant alligator in hot pursuit...

Leaving the Mole on their hoverjets, Scott and Virgil travel along the corridors of the burning Thompson Tower's vast underground car park, in search of the trapped Carter family... 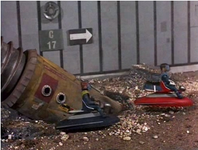 While Alan and Vigil travel down a rickety mine-shaft to rescue the trapped Williams brothers, Scott takes to his hoverjet to chase after the escaping Hood... 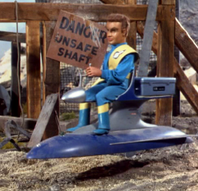 Virgil lands Thunderbird 2 near a wooded area and takes to his hoverjet, so that he can follow the Hood; but the Hood gives him the slip, by stealing an aircraft... 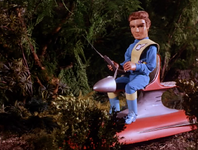 Martian Invasion also features the only time someone other than the Tracy brothers is seen to use a type of hoverbike: special-effects man Brian, a member of the sci-fi film Martian Invasion's production crew.

The only known cutaway appeared in the Redan comic issue No.10.

Very little merchandise has been released over the years that include the hoverjets. The following is a list of what is known to have been released: 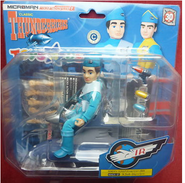 John gets a hoverjet!
(System Services) 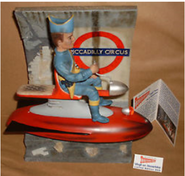 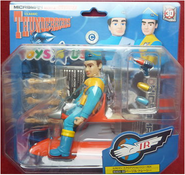