Having made his way to London International Airport by car, he is stopped at the gate by Airport Security. After a quick check of his ID, he directed to Building 67 were Captain Saville and members of the press await his arrival.

The delegation move to the observation platform, on the roof of the building, were they get a good view of the runway. The test flight goes well, and after a certificate of airworthiness is obtained, the plane will be ready to go into service.

A view through binoculars

After the Skythrust demonstration, Captain Saville tells Commander Norman that "the plane is ready to go into service", and he agrees that the test "was most satisfactory". They both pass their congratulations on to the designer, Mr Hackenbacker.

A call comes through from Saville's secretary, "Mr Hackenbacker is wanted on the phone". Saville offers the use of this number 3 phone (in a adjoining room). Its Lady Penelope asking Brains for a favour.

A call from Lady Penelope

Brains and Tin-Tin travel to London to watch the Skythrust land at London International Airport.

After the plane had been hijacked, Thunderbird 2 knocks-out the undercarriage with a missile, Captain Ashton tells Mason that they have no alternative but to return to London, were they at least have the facilities to handle a crash-landing. Reluctantly Mason agrees. The aircraft crash-lands at London Airport, but the secret 'Hackenbacker Device' comes into play, a rear-mounted electable fuel pod flies free and is detonated before the plane lands.

Mr Hackenbacker observed the aircraft through binoculars that can be worn on the head like a pair of glasses. 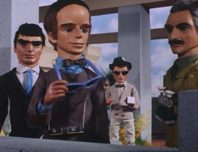 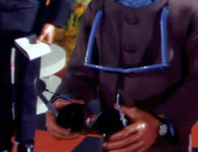 (Back view)
Community content is available under CC-BY-SA unless otherwise noted.
Advertisement