"High Strung" is the tenth episode of Thunderbirds Are Go! season 2, broadcast on December 17, 2016.

John detects a high altitude balloon heading straight for the Southern Alps in New Zealand and is unable to contact the pilot. At first everyone suspects that Francois Lemaire is the pilot but when Scott boards the craft he discovers that the pilot is a teenager named Brandon Berrenger, who works for Lemaire. When the balloon crashes on top of a mountain Scott and Brandon have to use Brains' new invention, RAD, to get down.

Virgil: "If we had a frequent rescue program, he'd be gold status by now."

John: "Don't do anything stupid down there, Scott."
Scott: "Define stupid!"

Scott: "Someone needs to get this guy some flying lessons!"

Kayo: "Lemaire? Is that you?"
Madeline: "Mm-hm. That's the last time he'll try rollerblading on the deck of his yacht... in a force ten storm."

Brandon: "What's the worst that could happen?"
Scott: "I don't know, you could hit a mountain?"
Brandon: "Oh yeah. Apart from that, though."

Brandon: "Hey, Brandon here. This is so cool, me and Scotty are like exactly the same. Thrill junkies, man!"
Virgil: (chuckles) "Yeah, I think the kid's right, bro. You're like two peas in a pod."
Scott: "Yeah, well, this pea wants out of this pod, and off of this mountain, so if you wouldn't mind."

Brandon: "Just make it cool, yeah?"
Scott: "Cool? Uh, sure thing." (clears throat) "This is Scott Tracy, International Rescue, piloting the RAD, and it's, uh, pretty rad, actually."
Brains: "Told you it was a good name."

Virgil: "This is nice. We should invite that kid over."
Kayo: "That would drive Scott up the wall."
Virgil: "Exactly." 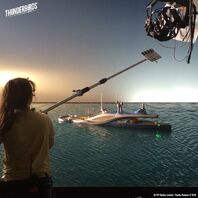 'There's not too many things I miss about earth, but this is one of them'
'Enjoy'

'You're awfully close to the southern alps'

'Virgil, are you still there?'

'I think we have a situation'

'Wow! Custom-made, high-altitude, helium filled, one of a kind'

'If we had a frequent rescue program-'

'-He'll be gold status by now'

'Lemaire, this is International Rescue. Do you read me? Lemaire?'

'I don't like the look of that thing, we need to get onboard'

'That's strange, where is he?'

Scott flies off towards the New Zealand Alpine region

'I've got visual on the balloon. The internal lights are on but Lemaire's still not answering'

'Comms could be down or he might be hurt'

Scott launches a cable to the craft and secures it

'It's going to hit that mountain, taking evasive action'

'I need to land Thunderbird one'

'Pick up Thunderbird one later, I'm gonna try something else'

'Don't do anything stupid down there, Scott'

Scott jumps off the ledge and glides after the balloon

'Scott, I'm picking up a ton of interference here'

'Have you changed position? I can't see a thing'

'You could say that'

'You're going to miss the capsule'

'I'm not aiming for the capsule!'

'Someone needs to give this guy some flying lessons!'

"If you're way up, up, up and away in your mega balloon, then who exactly is taking a cruise on your super-yacht?'

'Hey you can't leave that there!'

'What are you going to do, give me a ticket?'

'What are you doing in here?'

'In a force ten storm'

'Thunderbird one do you read me?'

'Scott, the balloon is still descending. If you don't change course you'll crash into the valley'

'Sounds like I don't have much of a choice Kayo. I'm going in!'

'What have you got Scott? Pirates? Balloon rustlers?'

'It's way worse than that, John'

'Who are you?'
'Brandon Berrenger. I help Mr. Lemaire with viral marketing and stuff'

'Are you International Rescue? Sweet! I love you guys, Er wait.. who needs saving?'

'Me? Awesome! Are you cool with me filming this?'

'Hey Brandon, why not take it for a spin, get some 'wild' footage?'

'Why didn't you answer any of our calls?'

'I was getting way too many of my followers calling in'

'So I switched to broadcast only'

'It's no good, your altitude adjusters, they're shot.'

'Let it float free man, what's the worst that could happen?'

'I don't know, you could hit a mountain!'

'I'm bringing her in for an emergency landing'

'Intense! We totally crashed into the mountain!'

'Hey take it easy! We're right on the edge!'

'Me and Scotty are exactly the same, 'Thrill junkies' man!'

'I think the kid's right bro, two peas in a pod'

'Well this pea wants out of this pod and off this mountain, so if you wouldn't mind?'
'Ok hang tight, I'm on my way.'

'Tell me you didn't interrupt my launch to say your catchphrase.'

'This is the perfect opportunity to test it out'

'That's great Brains, but let's speed it up'

'I'm on my way Scott, finally. You and your new friend keep warm'

'Didn't you do anything crazy when you were my age?'

'A mountain adventure too!'

'Awesome! say something for the camera d-d-dude!'

'Brandon! Time to get serious!'

'Brains gave me something that might help you get down. He calls it RAD'
'Like that catchphrase?'
'No, that's R-A-D'

'I know, but if this thing works we won't forget it. Stand by.'

'Sorry about that, Air's a little choppy up here'

'C-couldn't you use your cool j-jet pack and fly us over?'

'Carrying both of us with these crosswinds?'

'Not a great idea'

'We made it to the package'

'Brains, you wanna tell me what I'm looking at?'

'Oh and remember to step back quickly before it opens up.'

'Awesome! Woah, this thing is crazy. What does it do?'

'It's designed to make a rapid decent over difficult terrain'

'Brains, this thing only seems to have one seat'

'Oh yes, did I forget to m-mention that?'

'Cosy, I like it!'
'I really need to get off this mountain'

'Ah yeah, this is going to be a case of learn on the job, Brains'

'We are not going to fit! How do I make this thing thinner Brains?'

'Deploy the structural modulator'
'The what?'

'Uh..hey! Why don't you start filming me again?'

'This is Scott Tracy - International Rescue - Piloting the RAD, and it's uh..pretty rad, actually'
'Told you it was a good name'

The other craft land at the base camp

'We're not slowing down fast enough. Brains? Is there anything else we can do?'
'Erm, l-like I said, it's only a prototype'

'We're down. I'd call that test run a success'

'Hey Scott, what happened to your number one fan?'

'This hardware was all for me?'

'You can tell him yourself'

'He has only one thing to say to you after pulling a crazy stunt like that. You're promoted to chief test pilot'

'This is nice, we should invite that kid over'
'That would drive Scott up the wall'

'Hey Brandon! How'd you like to ride with me?'

McGill, Blackmer and Dr. Orchard from Attack Of The Alligators!

The highway into the tower from City Of Fire

The Martian Space Probe from Day Of Disaster

The Empire State Building from Terror In New York City

Tin-Tin and Colonel Casey from Edge of Impact

The car that crashes under the Thompson tower in City Of Fire
Community content is available under CC-BY-SA unless otherwise noted.
Advertisement