"Heist Society" is the 17th episode of Thunderbirds Are Go!. It was broadcast on November 21st, 2015.

On Tracy Island, Gordon, Brains, Virgil and Scott tell Alan that, Brains old friend, Professor Moffat is heading for a GDF facility in Iceland, escorted by Lady Penelope and Parker. She's carrying Centurium 21 - a particle created from the disaster at the Supreme Hadron Collider. Brains explains that as the particle won’t work at high altitudes, it must be transported below sea level.

On an underwater train, John notifies Penelope that the GDF will await their arrival. Outside the tunnel, the Hood approaches in a submarine. He uses explosives to blow the tunnel open, but the bulkhead seals just in time. Another explosive damages the tunnel, causing water to flood in. The Hood cuts comms with John and the driver with an electromagnetic pulse.

Scott, Virgil and Gordon set off for the danger zone with Thunderbirds 1, 2 and 4, while Brains stays behind to help from the lab. When the Thunderbird craft arrive at the tunnel, Brains advises that TB2's cables are too short to reach the depth of the tunnel, and TB4 lacks the lifting power - before assembling 4 remote airbag-pods, and then TB4 is launched. Inside his sub, the Hood disguises himself as Professor Moffat, before dealing with the original counterpart and meeting Penelope; and Parker finds the ladder to the sub. When TB4 arrives at the tunnel, Gordon checks the damage before spotting the Hood’s sub. He fires a conductive amplifier at the tunnel, re-establishing comms. Gordon explains to Penelope about the heist...and the Hood disguised himself as someone on the train. But the Hood's disguise unravels, when Sherbet attacks him! He grabs the case containing the Centurium 21 and escapes with Parker and Penelope in pursuit, but he blinds Parker and makes it back to his sub. Penelope throws a tracking beacon onto the case, before the sub detaches and the tunnel floods.

The airbag-pods clamp onto the tunnel, and three of them inflate. The driver cuts power to the train’s maglev system, and FAB 1 exits the tunnel in its submarine mode to go after the Hood. The Hood’s sub appears above it and drops a transonic depth charge, which explodes near the car and damages its turbines. Parker lands the car on a rocky outcrop, and fires the engines again. Brains tells Gordon that one airbag’s pump has a blockage, which he can’t unblock remotely. Gordon unblocks it, and the tunnel section is hoisted to the surface. Meanwhile, FAB 1 fires torpedoes at the Hood’s sub, disabling its life-support system. Gordon hooks a cable from TB1 onto the hull of the sub, and Scott hoists it up to the surface. Cursing them, the Hood flees in an escape pod, before the sub rips apart.

Back on Tracy Island, Penelope and Parker explain that the Centurium 21 was successfully delivered to the GDF facility. Professor Moffat insists that Brains would like to show her his lab before they exit the lounge; Gordon sniggers, and they turn back at him.

Gordon: "You remember Brains' girlfriend Moffy from our energy collider adventure?"
Brains: "Er, colleague, Gordon. Professor Moffat and I are simply old friends."
Gordon: "Sure, Brains. Like nobody can feel all that nerd-trino energy with the two of you in a room together."

John: "You planted a tracker on The Hood?"
Lady Penelope: "My emergency locator. Never underestimate a Creighton-Ward."

Lady Penelope: "Shall we blow him another kiss?"
Parker: "Happily, m'lady." 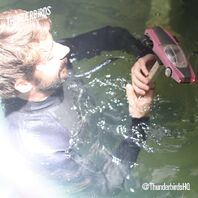 Moffie with Penelope and Sherbet on the train, with the Centurium 21

John checks in on Penelope and Moffie

The Hood's submarine is tracking the train's travels with interest...

A depth-charge from the Hood's ship

The driver notices that something's wrong in the tunnels ahead

The train comes to a halt, as the tunnel closes...

The Hood drops another depth- charge onto the underwater rail line

Trapped in a tunnel, flooding with water!

John's talking to the driver about the situation...

"Let's give you something not to talk about."

The Hood starts to weld into the train tunnel

Parker awakes after being knocked out, and was licked by Sherbet as he came to

TB4 heads towards the scene

Gordon reports back about the damage he's coming across

John is talking to Gordon about where the train is trapped

The Hood's ship finally comes up on the radar

Sherbert didn't growl at Moffie before - but is, now!

Gordon gets a transmission through to Lady P. and warns her about an 'uninvited guest' on the train

...and the Hood's disguise begins to malfunction

Lady P. pursues the Hood out onto the top of the train

"So sad we won't be furthering our aquaintance, Lady Peneleope."

Lady P. runs back along the roof of the train to get back inside, as the whole section re-floods

The Hood makes a getaway

"You planted a tracker on the Hood?"

The portable air-bags reach the train section and open up, ready to lift the train to the surface

TB4 moves in to cut the section free

Brains discovers a blockage in one of the airbags...

The section of track begins to float up to the surface

TB4 now goes off after FAB1 and The Hood

The Hood prepares for another go at FAB 1...

...only to realise TB4 has come to their aid

TB1 pulls the cable round the Hood's ship upwards...

...as it begins to fall apart