"Havoc" is a villain in Thunderbirds Are Go! television series, properly debuting in season 3.

Havoc first appears in physical form in Brains vs. Brawn. However, she speaks first in Chaos Part 1. She is a member of the Chaos Crew, a criminal alliance formed by the Hood to cause chaos where ever they go.

Havoc, alongside her brother (Fuse) and her employer (The Hood), were arrested in The Long Reach Part 2 by the GDF.

Havoc is one of the two members of the Chaos Crew, the other member being her brother, Fuse. She is a thief, tech expert and espionage agent. As the more level-headed and detail-oriented one of the duo, she is the one to usually do the planning and pull off their more subtle missions. She is armed with a pair of tech gloves, which allows her to hack, and in some cases, control, any digital equipment she touches. She also possesses Holoballs, which allow her to cover her tracks and hide herself when necessary.

Havoc is also the more agile of the two, showing more finesse in her physical activities, seen pulling off acrobatic stunts and scaling walls often whenever she heads out on missions. Unlike her brother, who is more eager to take a confrontation head on, she prefers to work around obstacles, and would avoid direct confrontation with anyone if she can help it.

However, both she and Fuse have been shown to make school-kid errors, for example, leaving the car unlocked in Rally Raid. Also, in her eagerness to please the Hood, Havoc decided to steal the Holotrix to surprise their boss, even though it wasn't direct orders from him. Also, she stole Thunderbird 3 from right under Alan and Kayo's noses without even thinking what she was going to do with it; to make matters worse, the Hood wasn't impressed with her actions.

When Havoc and Fuse attacked Tracy Island, she sent a virus into the computer inside Brains' lab, causing the robotic tools to go awry. However, whilst Lady Penelope, Parker and Grandma Tracy created distractions, Kayo was able to shut down Havoc's virus. Deciding to forget about the Mechanic, Havoc called Fuse that they were going, only for the Mechanic to remove a wheel from Fuse's vehicle, Basher just when the GDF arrived to arrest them both.

After blowing up a factory, Havoc leaves the scene aboard Spoiler which she later docks with the Chaos Cruiser. She goes to her next mission which involves getting herself captured so the next part of her assignment can go into effect.

In Growing Pains, Havoc breaks into and steals a growth serum from the Global Seed Vault. Captain Rigby and Kayo follow her. She escapes the seed vault with a code, leaving Kayo and John to rescue the vault keeper Ned Tedford while Rigby followed Havoc on Kayo's bike. He manages to hack into her suit. However she escapes with Fuse in the Chaos Cruiser.

In Signals Part 1, the Hood sends Havoc to investigate what International Rescue is doing, but her cover is blown when Kayo detects her on radar. Havoc re-activates the space laser and makes International Rescue's efforts more difficult than before. Kayo later eliminates the laser with a astroboard and a cloaking device. Havoc then steals Thunderbird 3. 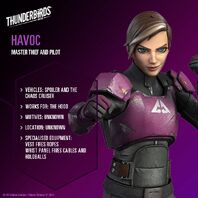