Harry Malloy is an "associate" of American businessman Warren Grafton, whose New York City-based company - the Pacific Atlantic Monorail Corporation - is really a "front" for the illegal activities of his criminal gang.

Malloy and his fellow Grafton Gang member, Selsden, get "taken for a ride" - in more ways than one - in the episode Brink of Disaster. 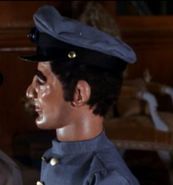 A Trip to Creighton-Ward Mansion

Malloy chauffeurs Warren Grafton to Lady Penelope's Mansion. While Grafton is taking tea inside with Her Ladyship, looking for investors for his Pacific-Atlantic Monorail company, Malloy "cases the joint" by taking photographs of the mansion's exterior.

Under cover of darkness, Malloy and Selsden return to the manor. With the alarms deactivated - by a hidden device planted earlier by Grafton - the two crooks easily get inside, and set about plundering the contents of Penelope's hidden floor-safe. However, the security devices on the safe itself are still intact, and alert Penelope and Parker - who use machine-guns to disable the crooks' getaway car, as they attempt to flee the scene with their ill-gotten goods. When they try to steal FAB 1 instead, Penelope locks the steering by remote control, trapping Malloy and Selsden inside - with the pink Rolls Royce going round and round in circles...

Driving to the Manor

The loot on the back seat

They spot the garage

Around, around we go

After being arrested in the grounds of Creighton-Ward Manor, Malloy and Selsden - along with the rest of The Grafton Gang, including Grafton himself - are sent to prison.

As Collins
Community content is available under CC-BY-SA unless otherwise noted.
Advertisement