Harman is the owner of Harman's Department Store, in New York City.

He's also a member of the Coralville Children's Hospital Committee; and in this latter capacity, he and his fellow committee members discuss a holiday-themed fundraiser, to help pay for a new solar therapy wing at the hospital.

Saunders, another member, suggests the idea of a special Christmas rocket (which his company will supply), filled with toys provided by Harman's. Harman himself starts off the fund, by providing a cheque for $10,000. The rocket will also be launched from the roof of his New York store (guaranteeing lots of holiday-shopping publicity), and will need only 10 minutes to reach its destination in Coralville.

A successful test-flight precedes the real one - which parachutes the rocket's special-cargo canister gently down onto the grounds of Coralville; and it's brimming with holiday presents - one of which contains a very special gift: an invitation for one lucky youngster to spend Christmas with International Rescue...

Harman appears in the episode Give or Take a Million; and his voice was supplied by Ray Barrett.

Harman times the flight of the test rocket

Waiting for the test rocket to arrive 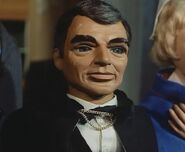 Checking on the toy packer

A toast to success