Thunderbirds Wiki
Register
Don't have an account?
Sign In
Advertisement
in: Classic Thunderbirds Characters, The Tracy Family, Heroines,
and 23 more

"Goodness! I just can't believe that I'm joining (the) International Rescue team at last. I'm dead proud of you boys, and the wonderful things you do."

Grandma Tracy is the mother of Jeff Tracy, grandmother of his five sons (with his late wife, Lucille), and matriarch of the Tracy family.

Grandma has witnessed remarkable changes in the world, and in her own family, over her lifetime: she's seen her son Jeff land on the Moon, and her five grandsons (who she helped raise, after their mother died) grow up and embark upon adventurous careers of their own...culminating in the founding of International Rescue.

Having adapted to life on Tracy Island, she enjoys looking after her extended family; including Kyrano (they agree to disagree, in the kitchen!), his daughter Tin-Tin (might there be a bit of match-making, going on?), and resident genius Brains. They're all protective of her, too, in their fashion. She's game to pitch in and help, where she's able, with rescues; and she even helped save one, with some important information! And, while "visitors are few and far between," she makes certain that guests are well looked-after: from youngsters Tony and Bob Williams and Nicky, to Lady Penelope and Parker...

With all her brood nestled under the same roof (Thunderbird 5 shift-changes notwithstanding), Grandma is the emotional heart of the Tracy Villa, which her loving care has made into a real family home.

Grandma appears in 17 episodes: Terror in New York City (cameo), Day Of Disaster, Desperate Intruder, End Of The Road, The Uninvited, Operation Crash-Dive, Vault Of Death, The Mighty Atom, The Man From MI.5, Cry Wolf, Move And You're Dead, The Duchess Assignment, Attack of the Alligators!, The Cham-Cham, Lord Parker's 'Oliday, Ricochet, and Give or Take a Million.

She also appears (albeit in a non-speaking role) in the movie Thunderbird 6.

Move and You're Dead

End of the Road

"Smiler"
End Of The Road 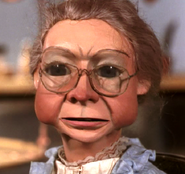 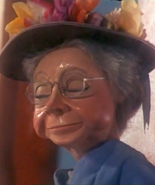 "Blinker"
Move and You're Dead

I know something you don't know... (Vault Of Death) 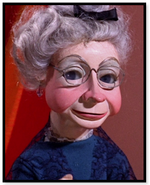 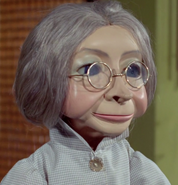