Thunderbirds Wiki
Register
Don't have an account?
Sign In
Advertisement
in: Thunderbirds Are Go!, Aircraft, Military Aircraft,
and 11 more

The GDF Flyer (also known as the Quadjet) is the primary aircraft of the Global Defence Force.

The GDF Flyer is a highly versatile aircraft, being able to carry large loads and land on any surface any where in the world. The flyer acts as a cargo plane, carrying troops and vehicles. It had two rotating VTOL jets for takeoff and landing and a front mounted ramp that lowers, allowing troops and vehicles to enter or exit the aircraft. It also has built in weapons like air mines.

The GDF Flyer made its first appearance when Colonel Casey promoted Marion Van Arkel as a nuclear materials expert for the GDF. The plane took off from an unknown GDF base with Marion and Casey inside.

Ned Tedford was at the controls of a GDF Flyer about to take off with him panicking inside (archive footage from Crosscut was used).

Colonel Casey took Lady Penelope Creighton-Ward and Parker to the Hudson University in a flyer and the same jet dropped off 3 troops at Creighton Ward Manor to pick up Parker's lucky kit, however, they were chased out of the house by Sherbet.

Colonel Martin Janus arrived in a GDF Flyer after a bridge collapsed, to relieve Colonel Casey from command, taking her place and grounding International Rescue. At Sa'd Madeena, he arrived with 3 flyers to escort Thunderbird 2 to base where they tried to break in by force. Later, another plane with Colonel Casey, Lady Penelope and Parker arrived so they can arrest Janus.

When Ned Tedford accidentally pressed a button at GDF HQ, several soldiers dropped from a GDF Flyer into a hangar, blowing their undercover operation. Banino, in possession of a repulsor magnet array, escaped in the flyer with Parker as his hostage. Kayo pursued the jet in Thunderbird Shadow but Banino used the jet's air mines to ward her off. He then smashed the control with a case of gold lidium before ejecting in a hang glider. Parker awkwardly landed the flyer on the roof of a factory but the weight of the plane caused the roof to collapse. Lady Penelope rescued Parker from the plane before Parker used the repulsor to stop the plane from crashing on top of them. The jet was however severely damaged in the aftermath.

A GDF Flyer arrived at Tracy Island where Colonel Casey captured the Hood, after his ship was destroyed.

Three GDF Flyers arrived at the Mechanic's giant earthbreaking machine, where they were attacked and brought down by a fleet of Air-Mechas.

Up from the Depths Part 2

Multiple GDF Flyers arrived at the World's Iridium Supply when it was under attack by the Mechanic.

A GDF Flyer was used to get troops, APUs and other equipment to where the antlion burst out of the ground.

Three Flyers arrived at the scene at the Grand Sequoia Dam.

Bolt From the Blue

A GDF Flyer with at least 2 troops arrived to arrest Hayley Edmonds.

A GDF Flyer hovered above Malloy's Boat to have him arrested.

Two Flyers arrived to have The Hood and The Mechanic arrested. However, the one that took the Hood away, has been hijacked by the Chaos Crew; and therefore leading to his escape. 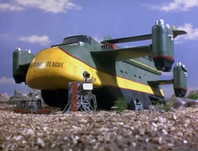