The Firefly is a pod vehicle designed by Brains. A dual-purpose fire-fighting and debris-clearance vehicle, Firefly's forward-mounted shield is constructed of Cahelium Extract-X - providing heat protection from intense temperatures and resilient dozer- blade capability. The shield allows access for the barrel of a heavy-duty gun armed with nitro-glycerine shells. These can be used to snuff out otherwise-uncontrollable fires, and for major debris clearance. Rear-mounted water and foam dispensers can be used for vehicle-cooling purposes, and for blaze control.

Virgil at the controls of the Firefly

Firefly was used to clear a path through the burning rubble, so as to enable the Mole to drill down to the underground passage-ways of the collapsed Thompson Tower building, to rescue the trapped Carter family.

Clearing a path for the Mole 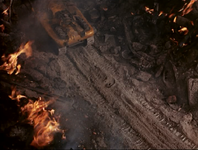 Overhead view of the clearance

Job done, returning to the Mole

Firefly (far right) viewed from above, in the Pod Bay on Tracy Island.

International Rescue are called when an Oil Well burns out of control. Scott oversees the operation from a near by Oil Well gantry, while Virgil in the Firefly, fires a charge into the base of the fire to extinguish the flames.

At least four cutaway drawings of Firefly - three of which were illustrated by Graham Bleathman - are known to exist:

The Firefly model was built using a Vickers Vigor tractor kit. The Mole and the Gray and Houseman Explosives Truck also used this motorised toy tractor as a basis.