"Fireflash" is the fifth episode of Thunderbirds Are Go!. It was first broadcast on Saturday April 25th, 2015. The story is an adaptation of Trapped in the Sky, the original series' pilot episode.

At Heathrow Airport, Fireflash, a hypersonic plane improved by Brains, is just about to take off. In the cabin after talking to Bernard Bottomsley, Kayo calls Scott and he asks her how she feels flying home on Fireflash. After she tells him that she can’t wait, the plane takes off. Moments after Fireflash goes supersonic, it vanishes from the radar. London control contacts John on Thunderbird 5 about the incident and he contacts Scott, Alan, Virgil and Gordon about the plane.

Meanwhile, aboard Fireflash, a suspicious Kayo asks the co-pilot about why they are changing direction and contacts John with no response. In the cockpit, Captain Hanson renders the copilot unconscious with a handheld device and uses the oxygen masks to knock the passengers out. Kayo, who didn’t put on a mask, enters the cockpit and finds a cloaking device under the control panel. After tearing it out, she contacts Tracy Island and Thunderbird 5 about Fireflash being hijacked by its own captain. Scott explains that the staff at Heathrow found the real Captain Hanson in a locker and the other Hanson was the Hood in disguise.

After Scott blasts off in Thunderbird 1, London Control contacts Fireflash and the Hood answers that he has the plane which was what he wants. In the cargo hold, Kayo attacks the Hood and while they fight, they damage a fuel tank in the process. After the Hood departs in an escape pod, Kayo returns to the cockpit and informs Scott and John that the plane is leaking fuel. John tells Kayo that the longest landing strip she could land Fireflash on is an abandoned spaceport in the Gobi Desert. After dropping down to subsonic speed, Scott performs a flyby to check there was no damage on the fuselage. As Fireflash approaches the runway, Kayo deploys the landing gear but one wheel lowers and the landing was aborted.

After Kayo tells Scott that when the plane lands without landing gear causing the leaking fuel to ignite, Virgil, Gordon and Alan arrive on Thunderbird 2. Alan and Gordon convert the two pods into Elevator Cars. When Fireflash lands on the Cars, Gordon worries that the plane is too heavy and it might crush them. Kayo takes off again and the exhaust from the plane’s engines causes the Elevator Cars to crash.

Kayo tries to crash Fireflash into the desert, intending that she might sacrifice herself. She tells the Tracy brothers that she appreciates them for coming to her rescue and she never started her life with them. Virgil brings Thunderbird 2 over Fireflash and fires the grappling cables around the plane, landing it safely. Kayo exits the plane just before the co-pilot and the passengers wake up. Scott thinks they did a great job, Kayo thinks she cannot fly commercial again and Virgil is left stumped on how he's suppose to get Fireflash back to London.

John: "There's no indication it crashed, so no need to panic."
Scott: "Have you even seen me panic, Thunderbird 5?"
John: "Figure of speech."

The Hood: "it seems we have a light sleeper on board."
The Hood: "Why does everyone else get to have the best toys?"

Alan: "You're coming in way too hot. Try and slow down to just above stall speed."
Gordon: "Yeah, these pods aren't exactly built for racing. We're not even sure if they can match your speed."
Kayo: "Work on your confidence building skills, boys."

Gordon: "Of course we still have a problem. How is Virgil going to get Fireflash back to London?"
Scott: "Seriously, how are you going to get it back?"
Virgil: "Uh... a really big rope?"
Kayo: "Yeah, good luck with that." 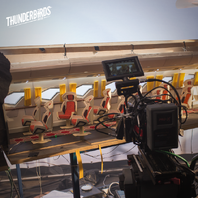 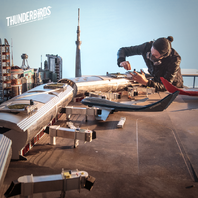 The cockpit of the Fireflash

Scott jokes about Kayo having to fly commercial airlines

Kayo says she wishes she could have flown Thunderbird S

Fireflash getting ready to leave airport for the runway

Kayo tries to contact Scott but can't get through

Kayo suspects something is up

Kayo pretends to be out like the rest of the passengers

Kayo checks on the co-pilot who has been stunned

Kayo discovers the cause of the transmission interference

Kayo let's them know the situation

The pilot is revealed to be The Hood, who has hijacked the plane

"He doesn't expect us to just sit here and wait does he?"

The Hood begins to search for the troublesome passenger

The Hood takes to the escape pod

TB1 is catching up with the Fireflash

The fuel is leaking into the belly of the plane

Kayo is going to attempt to land the Fireflash

Kayo lines up Fireflash with the runway

Some of the aircraft's landing gear becomes stuck

TB2 arrives on the scene

The elevator cars entering the runway

Kayo attempts to land again, this time on the elevator cars

Fireflash coming in to land

The platforms on the pods begin to collapse

Fireflash's weight is crushing the pods from the outside

Kayo pulls the plane up off the pods

Fireflash's sudden liftoff causes the Pods to flip and crash

The wreckage of the Elevator pods

Gordon and Alan are unharmed

TB2 comes to the rescue