Fireflash is a hypersonic airliner, capable of travelling at six times the speed of sound. It can carry a maximum of 600 persons (passengers and crew).

Its luxurious interior contains a comfortable lounge in each of its two main wings; its cargo area includes a vehicle garage (seen in The Impostors); and its cockpit is located, unconventionally, in the tail fin.

The Fireflash fleet has been the target of at least two separate sabotage events - both of which required the intervention of International Rescue...

Fireflash's nose cone contains landing sensors as well as radar and tracking systems. The main wings begin roughly halfway down the fuselage, and sweep back to the very end of the plane. Each wing contains a cocktail lounge, with Cahelium Extract X-strengthened windows that offer panoramic views.

The wings each have an aileron and a leading edge flap - when the plane is landing, the ends fold down 90 degrees to deploy the nacelle undercarriage; and then, when it takes off and is in the air, the undercart is closed and the end of each wing folds back up 90 degrees.

One of Fireflash's wing lounges

Fireflash at London Airport
Add a photo to this gallery

The Fireflash's cockpit is located in its tail fin - which allows its flight crew the advantage of a completely-unobstructed, linear view of the massive aircraft.

Forward view, from the cockpit

The top of the tail fin splits into two branches - each one housing three "Atomus" engines, that give Fireflash a cruising speed of 3865 mph (Mach 6 at an altitude of 250,000 feet). There are two sets of horizontal stabilizing fins: one pair near the front of the fuselage, the other attached to the engines.

The fuselage houses the forward passenger lounge, which has two decks (indicated by the two rows of windows, seen in close-ups).

Two rows of windows
Add a photo to this gallery

A Fireflash airliner is able to carry cars and other cargo in an underside cargo bay. (Lady Penelope took her Rolls Royce, FAB 1, with her on her trip to America.)

Loading is done by a hydraulic lift, that is built into parking bays at airports.

FAB 1 being loaded onboard Fireflash.

While the reactor itself is capable of running for up to six months, the shielding around it requires servicing at the end of every flight - thus limiting the aircraft's flight time to around 3-4 hours, before everyone aboard is exposed to lethal levels of radiation. 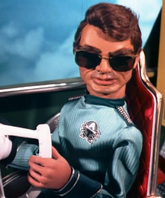 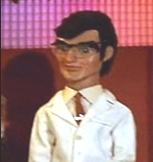 Cocktail waiter
(The Man From MI.5)
Add a photo to this gallery

The Fireflash fleet has been subject to a number of sabotage attempts - the first of which came during its maiden flight; and was a particularly notable incident, due to the fact that the rescue of the aircraft, its crew and passengers, introduced International Rescue to the world...

The Hood had planted a bomb in the airliner's undercarriage, inhibiting its ability to land. Early rescue attempts included the flight crew carrying out violent manoeuvres to loosen the bomb (to no avail); and putting a man aboard the plane to remove the bomb - which also came to nothing when he fell from the aircraft, parachuting to safety...

International Rescue - already monitoring the situation - arrived on the scene with a rescue plan, involving Elevator Cars to stabilize Fireflash's compromised undercarriage and to act as its landing gear. And it worked - notwithstanding damage to Fireflash's nose as it scraped along Runway 29, as well as to the Elevator Cars themselves (Trapped in the Sky)...

Two other Fireflash craft - 3 and 4 - later went missing, disappearing without trace into the sea. Scott Tracy of International Rescue and Captain Hanson of Air Terrainean teamed up on Fireflash 5, to not only save the aircraft (and themselves), but to discover the cause: sabotage, again; this time by an international gang of spies. (Operation Crash-Dive)

At least three cutaway drawings of Fireflash - all of which were illustrated by Graham Bleathman - are known to exist:

Haynes edition
Add a photo to this gallery

Fireflash, shortly after arriving in New York with a special guest — Duchess Deborah of Royston!
(The Duchess Assignment)

Fireflash about to do an emergency landing

Fireflash's nosecone
Add a photo to this gallery

Model kit
Add a photo to this gallery
Retrieved from "https://thunderbirds.fandom.com/wiki/Fireflash?oldid=111597"
Community content is available under CC-BY-SA unless otherwise noted.