FAB 1 is a pink, six wheeled saloon car owned by Lady Penelope Creighton-Ward, and driven by her manservant Parker. It was presumably, judging by the IR emblem, designed by International Rescue.

FAB 1 is designed to be swift, solid and functional for Lady Penelope's dangerous missions, while also looking posh and sensible enough to suit Her Ladyship as a fancy aristocrat. The inside is bright and cream, and the high-tech driving console is organized so that the driver is seated in the middle of the vehicle, rather than to the side (reminiscent of a fighter-jet, but in car terms it's similar to high-profile vehicles like the McLaren F1). FAB 1 doesn't just stop at being a car either, it has the ability to fly and swim.

Like all good British agent super-cars, the functionality of FAB 1 is not to be sniffed at! For a start, it has multiple explosive projectiles, such as missiles from the rear exhausts and torpedoes within the grille. It can also deploy smoke and oil from the rear to throw off any crook who dare approach from behind. In Unplugged, Parker says it has a button for flamethrowers, which he was tempted to use in a traffic jam.

FAB 1 also has the ability to travel in the air and under the sea. During flight mode, which is mostly used to get to places much quicker, wings deploy from underneath the car, and the disks on the wheels open up to reveal thrusters. Other abilities include the electrification of the outer layer of the car, and speed bursts created when the disks change shape to "grab" more air and move faster.

FAB 1 boasts advanced stealth capabilities, being able to render itself almost invisible to the naked eye.

Three switches and three buttons covered by a plastic case initiate use of these weapons and travel modes. 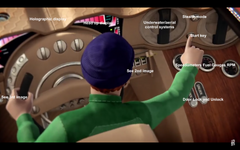 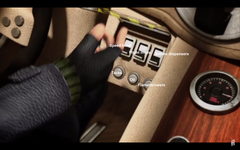 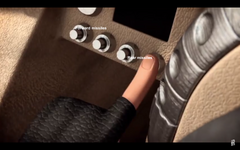 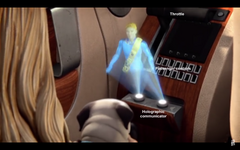 Like many characters and vehicles, FAB 1 is first seen in Ring of Fire Part 1. It is briefly stalked and rammed by an unseen villain in a black car, but Parker dispenses oil on the road, causing the black car to crash rather horrifically. FAB 1 continues to show up almost every time Lady Penelope is spoken to.

In Space Race, Lady Penelope, Parker, and Sherbet headed to the Consolidated File Archive, a place where the code to the deactivation of a space mine is located.

In Unplugged, FAB 1 loses power, like all the cars in London, after an electromagnetic pulse disables all the technology in London. Penelope and Parker are quick to discover evidence of the culprits once they exit their car.

In EOS, FAB 1 was present when Lady Penelope received some odd messages from John, who was warning her about EOS.

In Heist Society, FAB 1 emerges from the submerged Reykjavik Express in the North Atlantic Tunnel, with aquatic thrusters deployed, to go after the Hood's submersible. After temporarily losing power when the Hood drops a Transonic Depth Charge on them, Parker reboots the engines and returns to the chase, firing torpedo/missiles, which deploy either side of FAB 1's grille, after the villain.

In The Hexpert, the car was intercepted by the GDF who required Parker for opening an anti matter vault. It was later seen transported in one of the GDF Flyers.

In Designated Driver, Bill and Terry kidnapped Lady Penelope and Great Aunt Sylvia in FAB 1 but Alan and Parker saved them using FAB 0.

In Chain Of Command, Lady Penelope and Parker went in their car to see Colonel Martin Janus.

In Undercover, FAB 1 used a cloaking device which made it black instead of pink. It also changed the iconic "FAB 1" number plate for a more standard plate. Also, this is the first time Lady Penelope got to drive FAB 1.

In Legacy, FAB 1 was pursuing a thug with stolen plans on a motorbike. The car fired a sticky missile at the bike, covering it in a sticky substance before turning back to Creighton-Ward Manor.

In Earthbreaker, FAB 1 was used to take Parker & Penelope to Parkmoor Scrubs Prison in order to visit The Hood.

In Up from the Depths Part 1, FAB 1 was deployed to investigate how The Hood is communicating with The Mechanic.

In Up from the Depths Part 2, FAB 1 was deployed to pay a visit to The Mechanic, only to find he was a fake drone.

In Lost Kingdom, FAB 1 was used to assist the rescue underwater.

In Weather or Not, FAB 1 was chased by some weather drones which were made by Langstrom Fischler.

In Escape Proof, FAB 1 was used to track down the The Mechanic underground.

In Clean Sweep, FAB 1 was used to transport a key card to John performing a rescue. However, as the altitude of the rescue sight was very high, FAB 1 started dropping from the sky, and the car was saved by Thunderbird 2.

In The Man From TB5, FAB 1 was heading to a charity auction with John, where The Hood ruined the entire party.

In Home on the Range, FAB 1 searched for the intruder near the Gran Roca Ranch with Thunderbird Shadow, but a massive system malfunction made FAB 1 to make a crash landing.

In Rigged for Disaster, FAB 1 was used to transport Lady Penelope, Parker, and Sherbert to an oil rig, and it later assisted a rescue there.

In Brains vs. Brawn, FAB 1 assisted International Rescue by rescuing The Hood who was under attack by The Mechanic.

Compared to the Original

FAB 1 retains the classic Rolls Royce silhouette and is as close to a Rolls Royce as possible without actually being one. This is most prevalent at the front with the iconic grille; the car manufacturer's RR symbol is now the similar looking IR symbol, representing International Rescue, whilst a miniature rocket is now in place of the Spirit of Ecstasy. Whilst the classic pink colour scheme returns, the colour is no longer solid throughout, as the bonnet and boot covers are now a grey-silver (heavily resembling the real Rolls Royce Phantom "FAB-1" charity car). The headlights are more streamlined and the wheels are larger, though the tires are thinner.

As for the functionality, all machine guns have been removed, including the one in the grille, and replaced with explosives such as missiles and torpedoes.

In a traffic jam
(Unplugged)

Hovering with thrusters
(Under Pressure)

Concept Art - Behind the scenes