When construction worker Eddie Houseman makes a desperate attempt to complete a road-clearing operation in storm, the explosives he plants detonate prematurely, leaving him and the tractor dangling over the side of a cliff. 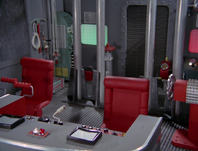 The explosives truck has a crew of two, driver (Chuck Taylor) and explosives operator (Cheng), the latter being in charge of firing the rear-mounted nutomic explosive cannons. Eddie would accompany them to supervise the operation. 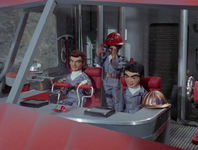 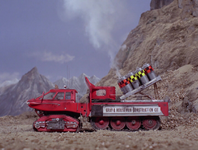 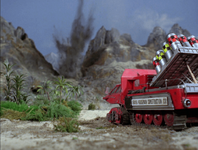 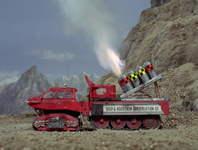 In the front section of the construction vehicle is a huge garage, where the explosives truck is stowed. After re-entering the garage the truck was rotated on a turntable to face forward, ready to be deployed again when needed. 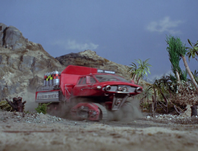 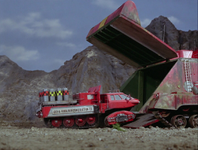 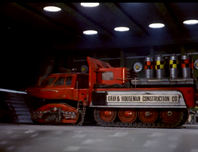 Contracted to pave a road through the mountainous regions of South-East Asia, the Gray & Houseman Construction Co. (led by business partners Bob Gray and Eddie Houseman) ran into trouble when powerful storms threatened to render them unable to complete the road on schedule. Eddie, noting that the company only obtained the contract through a deal to get the road finished ahead of time, stubbornly refused to let the storms ruin his hard work and devised a plan to drive the storm-induced landslides away from their road paving through the use of strategically-planted explosives, though this was met with disapproval by Gray, who noted the plan as too dangerous, and unwilling to let Eddie risk his life, instead opted to request an extension on the construction duration.

As Gray and the rest of the construction crew slept that night, Eddie went ahead with his plans anyway, secretly taking the Tractor and the nutomic explosive charges with him up the thin mountain trail, and began planting the explosives as the storm raged on.

Awoken by the staff, Bob radios Eddie after finding that he has gone ahead with his desperate bid to complete the road against his instructions. Warning him of the seismic instability in the mountain, the explosives abruptly detonate, leaving the Explosives Tractor teetering on the edge of the cliffside road.

Hailed by Gray, International Rescue soon arrive. Unable to get within close proximity of the vehicle (at the risk of it overbalancing,) Scott manuevers Thunderbird 1 beneath the truck, acting as a support as Virgil and Alan move in with Thunderbird 2's magnetic clamp. The vehicle proves too much of a strain on the claw however, and gradually the tractor begins slipping from Thunderbird 2's grip. Eddie, sensing the danger, jumps clear of the tractor as Thunderbird 2 continues to the ground to disarm the onboard explosives.

As Thunderbird 2 cleared the mountain range, the tractor slipped further, breaking free of Thunderbird 2's hold and falling to the ground below, with the onboard nutomic charges and fuel erupting into a massive explosion that destroyed the vehicle on impact. 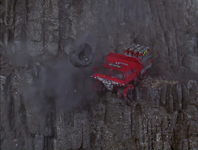 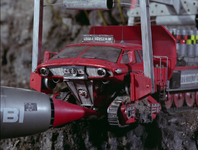 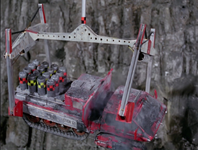 As far as is known, there is only one cutaway drawing of the Explosives Truck, illustrated by Graham Bleathman. It appeared in Redan Thunderbirds Comics. 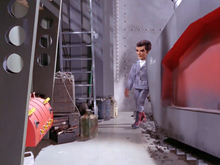 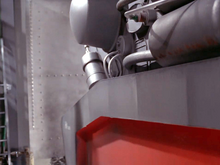