The Excavator is a specialised digging operations machine used by International Rescue. Rescue operations involving the Excavator often include mine or cave collapses.

The Excavator is equipped with a powerful precision drill in the scoop containing the rock crushers that can cut through extremely tough rock and metal.

The rock cutter spins forward, scraping rock pieces into the scoop where they are crushed. The crushed rock and dust goes through some ducts and out two extraction nozzles at the rear of the vehicle.

As far as is known, only two cutaway drawings of the Excavator exists. The first appeared in the Redan comic (issue 81), and was illustrated by Graham Bleathman. The second drawing was included in the Haynes Thunderbirds manual.

The Excavator In Action 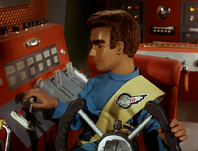 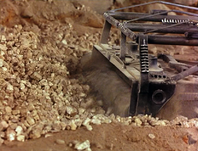 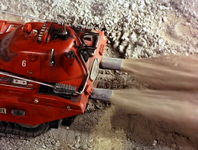 Crushed rock and dust blown out of the ducts

With the crusher elevated, the drill bit starts to rotate 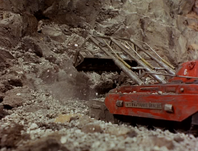 A hole is drilled into the cave 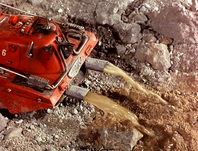