Kayo, with the help of a futuristic game creator that only talks like a wizard, must play through a futuristic holo-game called Cavern Quest to stop the Chaos Crew from stealing a powerful piece of technology - the Holotrix.

Kayo: "Clock's ticking. Please tell me you can read that?"
Alan: "No problem. I've been stuck in this cave so many times, I can read every language from Argdal to Zilibish."

Kayo: "We should stop in and play some time."
[Mini-MAX passes the virtual reality goggles to Alan]
Alan: "Hold on, fun? Play? Do you hear the words coming out of your mouth?"
Kayo: (gets the goggles from Alan) "I can't be the serious one all the time... Alonius." 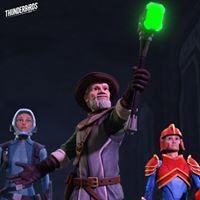 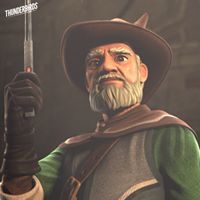 "We're here to steal the holotrix..."

"I'm this close to beating the whole thing, this close!"

"Until we finish repairing the space elevator, you're not leaving Thunderbird 5."

"You mean Kayo gets to try the real life game before anyone else?"

"You mean the machine that makes all the holograms in the game?"

"The Hood could hide an army if he had one of those."

"This wand controls the whole game!"

"That's my sage knight character from the virtual game."

"Are you really that desperate?"

"Hand me the detonator."

"The real treasure's up there."

"My quest controls are breaking apart..."

"No more games. This ends now."

"I already had a plan in place to steal that."

"We should stop in and play some time."

"I can't be the serious one all the time."