Elliot is a character from The Impostors. He is a technician on board the Space Observatory 3 satellite. He gets stranded in space when his jetpack malfunctions.

Elliot's spacesuit has the markings of the United States air force on his helmet and arm patch with a shield design. The jet pack is controlled by buttons on his arm. 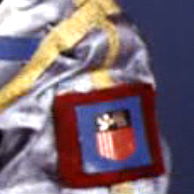 Space Observatory 3, a scanning satellite covering the South Pacific region, is out of action with an antenna fault. Technician Elliot suits up and goes outside to effect repairs, but his jet pack goes haywire, thrusting him away from the satellite. Too small to register on radar, Elliot has just three hours of oxygen left. Only International Rescue can save him.

Elliot drifts off into space 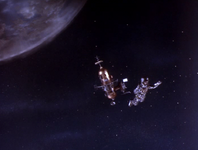 Thunderbird 3 to the Rescue

Risking exposure, Jeff sends Scott and Alan in Thunderbird 3 to rescue Elliot. They soon get a bearing on the astronaut and recover him from space.

Thunderbird 3 gets a radar fix on Elliot