"Where's Madeline got to?"

Deirdre is a model at the studio of Paris-based fashion designer François Lemaire.

She appears in the episode Alias Mr. Hackenbacker. 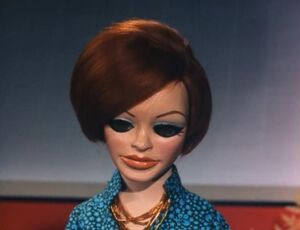 Madeline, Deirdre and François drive to the airport together to meet Skythrust, the venue for his latest fashion show. The jetliner takes off, bound for London; and the show begins - with Deirdre, Madeline and Lady Penelope modelling various couture from Lemaire's newest collection. And the show is a great success...

But then, Madeline and her cohort, Mason, hijack Skythrust - and hold Deirdre, Penelope, Lemaire and the rest of the passengers and crew at gunpoint, as hostages. Skythrust's pilot, Captain Ashton, is then instructed to fly the plane to a certain obscure location in the Sahara Desert, where the rest of the gang is waiting to abscond with Lemaire's entire collection, made of a revolutionary (and potentially lucrative) new fabric called Penelon... 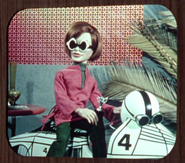 En route to meeting the Skythrust

Deirdre (l.) as the bridesmaid

Safely back in London