"He's still at it, poor fellow. Seems to be under some delusion that he's in charge of the rescue."
— Allington Bridge Controller

"Day of Disaster" is the sixth episode of Thunderbirds season 1, originally broadcast on 4th November 1965.

A severe electrical storm weakens the Allington Suspension Bridge, causing it to collapse when the Martian Space Probe convoy tries to cross it - sending the massive rocket itself, and its crew of two technicians, crashing down into the river below. Worse - the rocket's impact with the riverbed triggers the automatic onboard launch countdown, which cannot be stopped! International Rescue - summoned by an unexpected source - answers the call and must get those men out, before the now-rogue rocket launches itself - to certain annihilation... 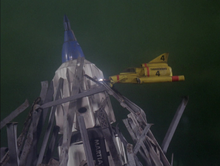 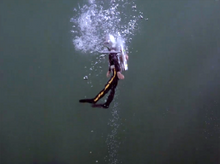 This episode was released on a 8mm home movie, produced by "Arrow films" (1965) 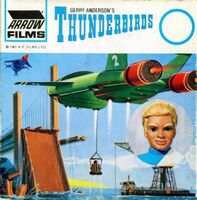