"So, you never did need rescuing? I think someone had better do some explaining."
— Scott Tracy

"Cry Wolf" is the eighteenth episode of season 1, first broadcast on 27th January 1966.

Two young boys in Australia — Bob and Tony Williams — love to emulate their Thunderbirds heroes, by taking turns playing at being rescuer and rescued.

One day, though, the game spirals out of control when a call for help, transmitted over their walkie-talkies, accidentally summons the real International Rescue... in the person of Scott Tracy, who decides to bring them back to Tracy Island with him — so they can see, firsthand, the consequences of their actions.

After their return home — and the story of their brush with IR appears in the newspapers — the boys face genuine peril, from the evil actions of IR's nemesis, the Hood. But nobody at International Rescue will believe that — this time — their call for help is the real deal...

Will they eventually realise how serious the situation truly is? 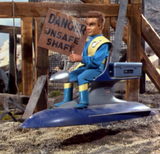