Crablogger Base Control is a vehicle from Path Of Destruction. It served as a mobile command and control center for the Crablogger forest-clearance vehicle. 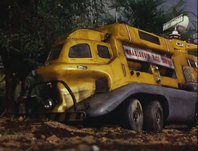 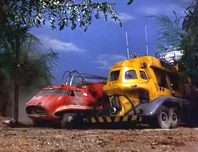 The Crablogger Arrives at Base Control

Crablogger 1, a huge tree-felling machine, arrives at base camp in South America in preparation for its first mission. In the evening the base commander (Jansen), takes the crew for a meal at a local restaurant in nearby San Martino, as they are not due to start work until the next morning.

Tracking the Crablogger on its Path of Destruction

In the morning, when the Crablogger sets off from the camp both of the two-man crew collapse, the victims of food poisoning, and the Crablogger veers off course, heading straight for San Martino.

The Crablogger veers of course

A worried Simms and Jensen

The ambulance in Winged Assassin

The Crablogger Base Control model as it appears today. The front canopy is a modern restoration.
Community content is available under CC-BY-SA unless otherwise noted.
Advertisement