Thunderbirds Wiki
Register
Don't have an account?
Sign In
Advertisement
in: Vehicles, Equipment, Path of Destruction,
and 3 more

The Crablogger was a forest-clearance vehicle featured in the episode Path Of Destruction.

A gigantic robotic lumber and wood processing vehicle, the Crablogger was developed by Jim Lucas of Robotics International Ltd to alleviate the need for unnecessary transportation of raw materials to intermediate processing facilities.

The Crablogger goes off course when the crew (McColl and Peterson) is stricken with severe food poisoning. It creates a swath of destruction through the village of San Martino and stops just short of the soon to be completed San Martino Dam before it crashes.

If its machinery jams, an explosion of the Superon-fuelled atomic reactor ensues, laying waste to everything within a 50-mile radius.

The Crablogger is composed of two sections: the front section saws and debarks timbers, and the rear section processes wood pulp which is then packed into barrels. Operations can be carried out via a pre-programmed remote control system, which is supervised by a two man crew or by manual control. An array of sensors mounted around the Crablogger's "mouth" direct the actions of its grabs and saws.

The front view of the Crablogger

Side view of the front part of Crablogger

The back end of the Crablogger

The crew enter the Crablogger by the way of a electronic hoist, that is swung out by a overhead crane. The men are then lifted to a topside entry hatch, and enter the machine (one at a time) through the opening, which is then sealed and locked behind them.

The hoist in position on the ground.

The crew being lifted to the top hatch

Crew enter one at a time

The main control room is located on the topside of the machine, and contains plasma view screens and video communications, as the room is completely sealed when in operation. The room also contains all the tree-felling and pulping control computers that are needed to complete a forest-clearing operation.

The Crablogger usually has a crew of three, but can still be operated with only two. The crew of Crablogger One are Peterson, McColl and Franklin. 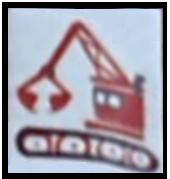 Crablogger Base Control: essentially a mobile operations room from where the Crablogger operations can be controlled.

Wood Pulp Transporters. The Crablogger's drawbridge enables pulp canisters to be deposited into these vehicles when mobile.

As the machine moves forward the main external saw cuts trees at root level. Additional underside-mounted saws remove roots. Whilst the saws are at work, the two grabs grip the tree firmly. Trees are placed onto the forward conveyor and rollers by the hydraulic grab arms. The spiked rollers allow tree trunks to be placed on the cutting bay conveyors. Mounted at the top of the "mouth" is an upper spiked tree trunk grip remover. Trees are moved into the cutting bay by the forward conveyor. Inside the cutting bay, trees are removed for either pulping or incineration. For use in the construction industry, larger branches and tree trunks are cut into planks. Afterwards, the planks are transported to the sorting bay.

View of the forward tree-trunk conveyoy

Tree being held by grab

Trees being placed in the spiked rollers

Pulp canisters being transferred while vehicles are still moving

Crablogger on a Path of Destruction

When the crew fall ill, the machine has already been put into automatic control, so the Crablogger goes on a path of destruction.

Main article: Crablogger on a Path of Destruction

To date, no fewer than four cross-sections of the Crablogger have been produced.