Thunderbirds Wiki
Register
Don't have an account?
Sign In
Advertisement
in: Thunderbirds Are Go!, Chaos, Growing Pains,
and 6 more

The Chaos Cruiser is an amphibious craft built by The Hood to serve as the Chaos Crew's main mission vessel and mobile base. There are compartments for both Basher and Spoiler, and armed with very advanced optical camouflage systems allowing it to disappear from sight in split second. While initially assumed to be an aircraft, it was revealed in Flame Out that it is also capable of underwater operations, as with some of The Mechanic's more notable aircrafts. It was later revealed in Signals Part 2 that it can also be used as an spacecraft.

The Chaos Crew's breaking in period occurs in Chaos Part 1. During this episode, the Chaos Cruiser is used to pick up Havoc and Fuse so they can be taken to their next assignment.

While not its first underwater mission, the Cruiser plays a large part in a fight over Braman with Gordon in Thunderbird 4 and is later pursued by Kayo.

Signals Part two marks the Cruiser's first use in space but, ironically, not used by the Chaos Crew themselves. Reece and Dobbs hijack the craft to pursue the stolen Thunderbird 3. While International Rescue got their craft back, Havoc did put up a challenge.

When required, Basher has a compartment behind the cockpit roughly in the middle under the craft. The Chaos Cruiser flies above Basher and cradles it with two arms. From there, it is locked in place and Fuse can enter the cockpit.

When required, Spoiler drives onto a ramp at the rear of the craft while the Cruiser is flying at ground level. once Spoiler is driven into place, the ramp is raised up and the car is locked into place. Havoc can enter the craft from there.

Fuse and Havoc sitting inside 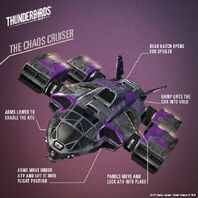