"Listen, Tracy. If anyone should be grateful, it's me. When Fireflash was in trouble on its maiden flight, you saved my life..."

Captain Hanson is a airline pilot employed by Air Terrainean, and based at London International Airport. He specialises in flying Fireflash airliners - and piloted the aircraft's maiden flight, whose intended destination was Tokyo. But when his flight was imperiled by a bomb planted aboard - making a conventional landing impossible - he and his crew and passengers found themselves at the center of International Rescue's very first mission...

And, when the Fireflash fleet was subsequently plagued by repeated sabotage, Hanson's and IR's paths crossed once again...

Voiced by David Graham, Captain Hanson makes his first appearance in Trapped in the Sky.

Hand held in Trapped in the Sky 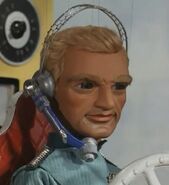 As International Rescue's three Elevator Cars - controlled by Virgil Tracy - race in careful formation down the length of Runway 29, Hanson must call upon all his piloting skill and experience to land his huge aircraft precisely atop each...enabling him and Virgil to use their combined braking power to slow Fireflash to a safe stop...and avoid triggering the bomb planted aboard by the Hood...

Off to check on the passengers

After two giant Fireflash airliners inexplicably crash into the Atlantic Ocean, International Rescue subsequently offers its expertise to assist in solving the mystery. Hanson is joined by Scott Tracy (with some specialized IR hardware) on the flight deck of Fireflash 5; and the two men meet face-to-face for the first time. As they take off on their test flight, Virgil and Gordon Tracy follow them, in Thunderbird 2. From aboard Thunderbird 5, Alan Tracy tracks them and coordinates communications with London Airport.

But then, out over the Atlantic - and Alan reporting their position is 20 miles off-course - the same disabling malfunction strikes again! Scott and Hanson are left with no means whatever of controlling the massive aircraft, as Fireflash falls through dead air towards the sea. From TB2, Gordon manages to board Fireflash's starboard wing - and finds critical machinery sabotaged, along with the saboteur himself! With a crash-landing only moments away, Gordon holds the cut cables together himself - just long enough for Scott and Hanson to pull up and avoid the water...

Deborah, Duchess of Royston (along with her Braquasso painting, Portrait of a Gazelle), is amongst Hanson's passengers on a flight to New York.

In The Duchess Assignment

In The Duchess Assignment
Community content is available under CC-BY-SA unless otherwise noted.
Advertisement