"Brains" is International Rescue's mission technical support, scientific advisor and - most recognizably - responsible for the conception and development of most of the Thunderbirds craft.[1]

Born on 14 November 2001 or 2040 (depending on who you believe), Brains was orphaned after a hurricane struck his home. At the age of twelve, he was adopted by a Cambridge University professor who recognized his great intelligence and encouraged his phenomenal learning abilities. He first met Jeff Tracy when he was giving a delivering a lecture at a cultural hall in Paris while Jeff was looking for a brilliant scientist to help make his plans for International Rescue a reality. After realising that Jeff was someone who wanted to use his knowledge and money for the benefit of others, Brains agreed to Jeff's offer. He was transported to Tracy Island straight away and immediately began work on designing amazing high tech machines for International Rescue including all the Thunderbirds and all the pod vehicles. His real name is unknown but he uses the alias "Hiram K Hackenbacker" and "Mr. X" to protect his identity from the outside world while he is developing new machines and aircrafts for other businesses, such as the Skythrust.

Brains is an extremely clever, highly-focused and intense individual, who spends the vast majority of his time inventing. Despite Brains' diffident and stammering manner, he's an expert scuba diver and a highly-skilled marksman. He enjoys studying trigonometry and thermodynamics in his spare time, and has a fondness for the game of chess. An extreme perfectionist who's never satisfied with his inventions, he continuously tries to improve them.

Brains appears in 28 episodes (exceptions: Martian Invasion, The Perils of Penelope, The Impostors and The Duchess Assignment). In End Of The Road, he appears only in a non-speaking role.

Brains also appears - and has a notable role - in both feature-films.

In addition, he appears in the Thunderbirds 1965 episodes, but is actually heard in only one (Introducing Thunderbirds).

Brains is one of International Rescue's most valuable members; for he was the creator of several Thunderbird machines.

When he' s called on to pilot Thunderbird 6 (Alan's restored Tiger Moth biplane), his IR uniform signature colour is brown.

As the main engineer on Tracy Island, he does all he can to help the organization, such as adding new features and carrying out repairs. 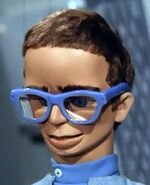 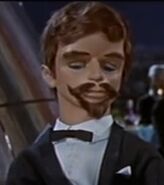 In disguise ("Blinker")
(Thunderbirds Are Go)

Resolute, and unafraid... (Path of Destruction)

At The Ned Cook Show (Terror in New York City)