"I told you we should have bought a guide book."

Blanche Carter, her husband Joe and their son Tommy are driving to visit the massive new Thompson Tower, on its opening day. But they get no further than the tower's cavernous underground-parking area, where they become trapped in a sealed-off corridor after fire breaks out and spreads throughout the tower itself...

Blanche and her family appear in the episode City Of Fire.

Eager to see some of the massive Thompson Tower's many commercial and shopping attractions, the Carters drive their automobile into the subterranean parking facility, which can accommodate some 10,000 cars. They then set off to find the monorail system that will take them to the tower itself, but without a guide book to direct them they soon become disoriented amidst the many look-alike corridors.

Things start going from bad to worse, as the sound of a distant muffled explosion reaches them - fire has broken out elsewhere in the parking complex and, unknown to the family, the Thompson Tower controllers start sealing off corridors in an effort to try to check the spread of the flames. The Carters become trapped in one of them, and their plight is finally discovered by the shocked controllers when they re-check the closed-circuit cameras...

With the tower itself evacuated, the massed fire brigades unable to stem the explosions consuming it - and now, with three lives at stake - the call goes out: "Calling International Rescue..." 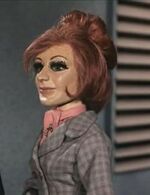 In The Perils of Penelope

At the Atalante restaurant

In Terror in New York City

In Danger at Ocean Deep

At the Casino
(The Duchess Assignment)

At the Paradise Peaks
(The Cham-Cham)

The Blanche puppet under construction
Community content is available under CC-BY-SA unless otherwise noted.
Advertisement