"Big Deal" is the fourteenth episode of Thunderbirds 2086, and thirteenth produced overall. The episode first aired in Japan on July 24, 1982.

There's more than meets the eye with Herman Grody. He may appear to be the new squeaky-clean head of Carillion Mining Corporation, but is actually an agent of the Shadow Axis. Swayed to their side with dreams of power, Grody plots to steal The Federation of all its Cryolite, giving the Shadow Axis the precious resources required to conquer his planet once and for all. 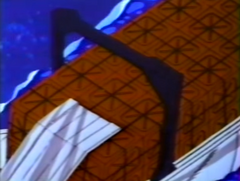