Thunderbirds Wiki
Register
Don't have an account?
Sign In
Advertisement
in: Thunderbirds Are Go!, Chaos, Path of Destruction (TB2015),
and 3 more

Basher is Fuse's personal vehicle. It is a quad bike that is specially designed to climb the toughest and steepest terrains. It has the ability to dock with the Chaos Cruiser and to carry one person (the driver).

Fuse uses Basher to damage a set of cranes. It later docks with the Chaos Cruiser to get him to his next assignment.

Basher was utilized to lay explosives and drive up mountains in order for Fuse to gain control of a transporter carrying volatile cargo. He fails to hijack the cargo and the Hood orders him to destroy it instead.

Basher is used to transport Havoc and Fuse through the caves of the Cavern Quest in attempt to steal the Holotrix. It can later be seen docked with the Chaos Cruiser after the two escape.

Basher can be seen docked.

Fuse uses Basher to escape from the Shackleton Power Plant and to report to the Hood - who is not impressed with him.

When required, Basher has a compartment behind the cockpit roughly in the middle under the craft. The Chaos Cruiser flies above Basher and cradles it with two arms. From there, it is locked in place and Fuse can enter the cockpit. 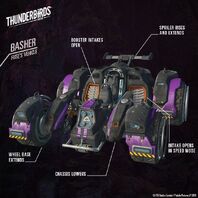