Situated in the Southern Hemisphere - between the Pacific Ocean to the east and the Indian Ocean to the west - the nation of Australia is regarded as the world's smallest continent (or largest island). Much of its natural landscape appears to consist of dry, arid plains and mountain ranges along with the occasional coal mine and weather station, although more-tropical venues along its coasts are not impossible to find. Pastimes enjoyed by the locals include blowing up mountains, with beer a particularly-favoured beverage.

Australia - along with Japan, Canada, The Netherlands (Holland) and England (Great Britain) - remains one of the few countries where Thunderbirds hold a strong fan-following, and the series continues to be broadcast to this very day.

In the World of Thunderbirds[] 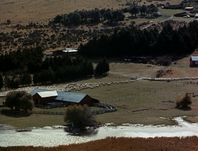 With reference to the episode The Impostors, International Rescue has at least two field agents based in Australia:

Thunderbirds initially began broadcast in Australia circa 1965 (according to the 1965 documentary on The Brains Behind Thunderbirds, the series had already begun showing there along with Canada, The Netherlands (Holland) and Japan). As colour television would not be available until 1975, these first broadcasts were available only in black and white.

While Thunderbirds remained on and off the air continuously throughout the 1970's and 1980's, it wasn't until 1993 when the series underwent a major surge in popularity, where it once more aired on Saturday mornings at 6am in the full-hour format. This would continue until the mid-to-late 1990's when the series popularity began to dwindle once more.

In 2001, Thunderbirds returned to Channel Nine on weekend mornings at 6am in the half-hour "cliffhanger" format. In order to fit the show into a 30- minute timeslot (20-22 minutes of show and 7-8 of ads), most episodes had at least 2-3 minutes of footage cut, leaving some episodes ending at random points where no original commercial break on the tapes could be found. Each first installment had "PART 1" written under the title in a font entirely different to the one used on the episodes themselves, and "To Be Continued..." on the bottom of the screen at the end. No attempt to add titles to second installments were made. The show would remain this way for several years before reverting to the hour format, until it disappeared entirely in 2007.

The series was shown weekdays at 4:30am (starting in 2013) and weekends at 6am on GO! (starting in 2009), the primary digital channel for the local Nine Network. These broadcasts were initially in two formats; both half-hour "cliffhanger" editions (the "PART 1" title remained, though "To Be Continued..." was dropped entirely, a "PART 2" title was added to some of second installments) from Monday to Friday, and the full "uncut" hour versions on Saturday and Sunday, sometimes with a few minutes of footage cut so it could fit the one-hour time slot.

From 2014 onwards, only the hour-length versions air during both timeslots. The order of broadcast differs significantly from other countries, and can even alter itself at random. The broadcast copies themselves are in 4x3 format and were lifted directly from the first DVD editions of the show, right down to the enhanced sound effects. Some episodes begin and/or end with the Carlton logo, and even a small handful of later stories end on the 1990's ITC logo.

Beginning February 2017 Thunderbirds had, for the first time in a decade, completely disappeared from Nine's main television scheduling; however, it still is watchable via the online 'Now' app for the station. While the 2015 series continues to occasionally air in rerun form on both Nine and ABC ME on alternation, its classic counterpart was quietly given a fifteen-month rest.

The series made its triumphant resurgence to television on May 28th 2018, returning to the traditional hour- long weekly format - with Trapped in the Sky at the not-so traditional timeslot of 3am!

While Thunderbirds maintained a general broadcast pattern in recent years, episodes can (and do) sometimes alter at random. For instance, Give or Take a Million is sometimes shown around Christmas, due to its festive nature, instead of the regular episode - only to show up again a few weeks later. On rare occasions, episodes would be shown if another program ran over or under time (part 2 of Sun Probe being a notable case). Nevertheless, the current order is:

As with the United Kingdom, the trio of Thunderbirds compilation films were made available, and remained identical to their overseas counterparts aside from a new classification strip.

In 1989, Filmpac Holdings (in association with Video Store Cult) acquired the license to produce Thunderbirds video tapes. Released under the title "Gerry Anderson's Thunderbirds ...Are Go!" and proclaiming to be "original uncut television episodes", each volume contained the same base package layout with a brief episode description, group shot of the Tracy brothers, original broadcast date, and regular cast list. While several episodes use promotional images on the covers, most took a still image directly from the episodes themselves (though not always the one on the tape) and upscaled to ridiculous proportions.

The first volume of episodes (known as the 'blue edition' for its blue background on the jacket) consisted of:

While the official number of episodes released stands at eight, more volumes have since been sighted. Referred to as the 'red editions' (for red replacing blue for the background); they included (but were certainly not limited to):

It is possible that the entire series of 32 episodes were released (as the tapes remained available for sale until the mid-2000's), but so far no evidence has been found to confirm or deny this.

Hot on the heels of Filmpac's tapes, Festival Video (an offshoot of Festival Records) released a series of five episodes in 1990. With a deeper-blue background and striking red International Rescue logo on the side, the covers used screen grabs as well, though were centered and given a thick white and red border. The back contained a list of the Director, Producer and Scriptwriter, plus running time. Each episode came with an in-depth synopsis that went so far as to spoil each episodes' respective ending.

The episodes released were:

A third series of tapes saw release in the early 1990's under Reel (and approved by ITC Entertainment). As opposed to Festival and Filmpac, the ten episodes chosen mostly took place in the latter half of the series. The covers feature a black 'starfield' background, and use a mixture of screen grabs along with publicity stills. While the layout and background remained the same, the classification strip changed colours for each episode.

These ten episodes were (in order of release):

To this day, Reel retain their license to release Thunderbirds, and have since produced a number of DVDs.

To celebrate the series' 30th anniversary in 1995, PolyGram distributed the series of four hour-length documentaries. Aside from a new classification strip, the covers are virtually identical to their United Kingdom counterparts:

Thunderbirds hit the DVD scene in Australia sometime during 2001. Similar to other countries, a series of 8 separate DVD volumes saw release, each containing 4 episodes plus extras (including fact-files, and short segments lifted from The Brains Behind Thunderbirds documentary). Chronology was once again thrown out the window, leading to bizarre episodic order changes - such as the series ending on The Impostors, instead of Give or Take a Million. As Reel retained the release rights, many publicity stills previously seen on their VHS copies were yet again put to use, more often than not continuing to have barely any connection with the episodes inside.

Reel would continue to re-release their Thunderbirds DVDs, often coming out with a new box set every few years featuring a unique extra (such as postcards, an extra disc, or sculpted character busts). More recently, the individual volumes have shown up yet again, this time at discount chains in white packaging.

In 2010, Thunderbirds came to HD in a series of six volumes. The cover art layout (which ran across all volumes) includes a group shot of the Tracy Brothers and an International Rescue Vehicle in the background (notably the five Thunderbird craft on their respective volume number, plus FAB 1 on volume six).

For the 50th anniversary in 2015, Thunderbirds got another release on DVD, this time with a 9-disc set of all 32 episodes and bonus content; however, unlike the Blue ray editions that use original footage, these use the old footage that hasn't been cleaned up and is still quite dark in comparison to the Blue ray counterpart.

Also in 2015, the Thunderbirds Are Go CGI version of the show was released on DVD, originally sold as individual volumes and then later sold as a complete series box set. The first half of the second season is currently on DVD in the UK, however the Australian release will be this coming April. 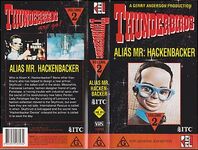 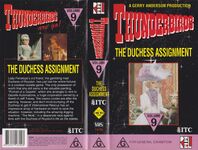 Countdown to Disaster - back cover 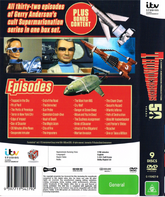 Back of 50th anniversay DVD set 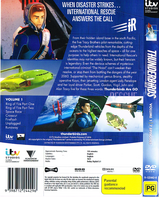 Back of TAG DVD volume 1, Season 1 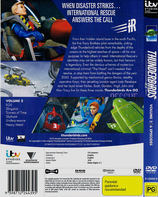 Back of TAG DVD volume 2, Season 1 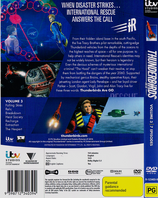 Back of TAG DVD volume 3, Season 1 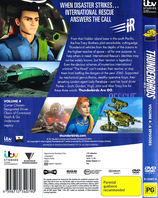 Back of TAG DVD volume 4, Season 1