Attack of the Alligators! (TCTB)

"You better go out and gwab them. We don’t need another wawsuit awownd here."
— Dr. Hornyak is such a caring soul for human life.

Attack of the Alligators!
Season 1, Episode 5

"Attack of the Alligators!" is the fifth episode of Turbocharged Thunderbirds, first airing on January 15th, 1995. It was also the twenty-third episode of the original Thunderbirds series.

Roxette finds herself in a double dose of trouble in various proportions; It's up to her to find a cure for a new growth chemical that increased a group of Alligators to great size, and solve the mystery of the incredible shrinking Tripp.

-"Hornyak, have you gone mad?"

-"Mad? No! Don’t you wealise the work taking pwace in this wabwatowy, is essential to the future of mankind as we know it? These bunny wabbits are only the beginning of the pwocess that will someday feed the entire world. Is that madness, sir? I think not!"

-"Hey man, you better shut up, you know? You say one word like ‘International Rescue’ and it’ll be your last!"

-"You have failed me yet again! How am I ever going to become ruler of the world, with bald fools like you working for me?!" 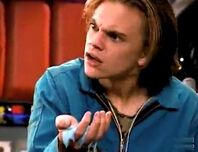 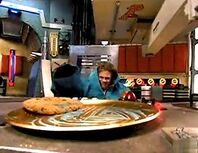 "Shrinking? What are you talking about?" 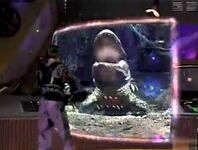 "Go away, kids! You're spoiling our pizza!"