Trapped in the Sky
The Perils of Penelope
Day of Disaster
30 Minutes After Noon
The Mighty Atom
Vault Of Death
The Impostors
The Man From MI.5
Danger at Ocean Deep
The Duchess Assignment
Brink of Disaster
The Cham-Cham
Atlantic Inferno
Path of Destruction
Alias Mr. Hackenbacker
Lord Parker's 'Oliday
Films:
Thunderbirds Are Go
Thunderbird 6

Aloysius Parker is the manservant of Lady Penelope Creighton-Ward and a member of International Rescue.

He's a reformed criminal who used to rob banks, among other things, as well as an expert at picking locks and cracking safes. His nickname is Nosey.

Parker is the last of a long line of loyal retainers who served the British aristocracy. He was expected to follow in his forefathers' footsteps, but he couldn't find work and fell into league with a series of London crooks. He learnt the tricks of the trade from them, and slowly made his way up the chain and earned his nickname 'Nosey'. However, he was eventually captured and landed in prison with Fred, a reformed bank robber. Fred eventually escaped from prison to rob the Bank of England.

Following his release, Parker decided to throw in his status and to find 'proper' work. He was still out of luck, though, and went back to his former ways. Then, whilst robbing a safe belonging to an oil tycoon, Parker was caught by Lady Penelope Creighton-Ward, a young aristocrat who did a bit of part-time spying. Her Ladyship had heard of Parker's status in the underworld and promised not to turn him in if he took up a working partnership with her instead. Parker realised that this was just what he needed and happily agreed.

His duties included assisting her on odd jobs, being a faithful butler, and becoming the chauffeur of her pink Rolls-Royce FAB 1. When International Rescue hired Lady Penelope as their London Agent, Parker was dragged in, too.

Parker is a valuable addition - both to Lady Penelope's secret activities, and to International Rescue missions. 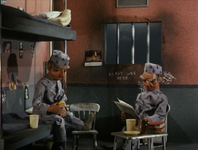 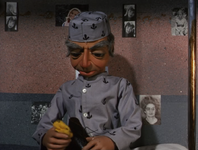 Parker appears in 16 episodes: Trapped in the Sky, The Perils of Penelope, Day Of Disaster, 30 Minutes After Noon, Vault Of Death, The Mighty Atom, The Impostors, The Man From MI.5, Danger At Ocean Deep, The Duchess Assignment, Brink of Disaster, The Cham-Cham, Atlantic Inferno, Path of Destruction, Alias Mr. Hackenbacker, Lord Parker's 'Oliday.

And he appears in The Abominable Snowman, Introducing Thunderbirds and The Stately Homes Robberies, for Thunderbirds 1965. 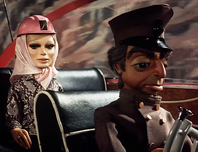 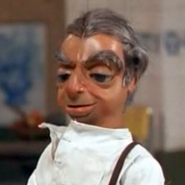 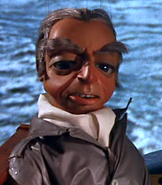 "Pseudo-blinker": one of his "smiler" heads with added plasticene eyelids.