Following a vicious storm, the controller was under immense pressure from the local minister to have the bridge re-opened for the Martian Space Probe. However, his assistant, Dave Clayton, advised against this, considering the storm might have weakened the structure of the bridge.

But, being the controller of the bridge, this officious character dismissed Clayton's concerns, and allowed the bridge to be re-opened. However, that decision proved to be his downfall as the storm not only weakened, but actually damaged the entire structure of the bridge as the weight of the Martian Space Probe wrecks it beyond repair.

Feeling deeply responsible for the loss of the rocket, the controller took it upon himself to rescue the trapped astronauts in the sunken rocket. So, he ordered for three floating cranes from the nearby docks. However, he dismissed Brains' suggestion to call International Rescue; he even considered him insane when he saw him talking to his watch!

The controller was voiced by Ray Barrett. 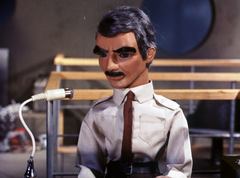 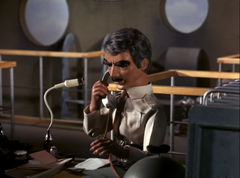 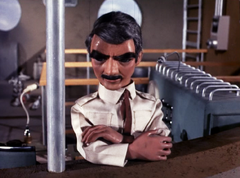 Disaster on a Bridge[]